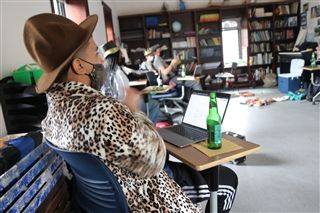 Untold Stories of the American Revolution

4/6/2021
It’s January of 1776 and the American Revolution has not yet begun. Colonists gather in Public Houses or “Pubs” to share their grievances against the British or their loyalties. In these sometimes-boisterous and largely white-male crowds, unfortunately, a variety of perspectives and identities are under-represented.

Fast forward 240 years to Mr. Donaldson’s 8th Grade US History class and this is the scenario his students are asked to step into as they role-play any identity from the time–loyalist, revolutionary, enslaved or indentured servant, native American, nobility, or colonial woman. They have been studying the multi-layered perspectives that existed leading up to the revolutionary war and the many unheard voices that some accounts of history have left out.

“In our Public House class,” explained Mr. Donaldson, “students are asked to challenge dominant narratives. We are asking students to investigate and imagine other identities from the times and jump into the argument. To make the exchanges more interesting, I gave them each a bottle of [non-alcoholic] Ginger Beer and a humorous list of colorful insults from the period.” Through this imaginative exploration and inventive role-playing, students are gaining a more tangible understanding of the period and building a wider range of cognitive empathy and historical perspective.

The exercise is grounded in a curriculum entitled “The American Revolution: Experiences of Rebellion,” where students read about European colonists, native people, and enslaved people at the time of colonization and revolution. They studied the political ideas, public statements, and actions that led to the creation of the United States. As the curriculum suggests, “History includes more than portraits of elderly statesmen in frock coats and powdered wigs. It also looks at the realities of life in the colonies for people from all different parts of society. These realities shaped political ideas and affected interactions—from conflict and treaties between colonists and native peoples, to the enslavement of and resistance by Africans, to colonial rebellion against the British.”